We are a family of 4 and live between Vermilion and

Lloydminster, AB. Our 2 daughters are just as horse

crazy as i am. My Husband grew up on a cattle and

grain farm, but he sure has away around the horses.

Our first foal we ever had, Rosco, he Broke himself. 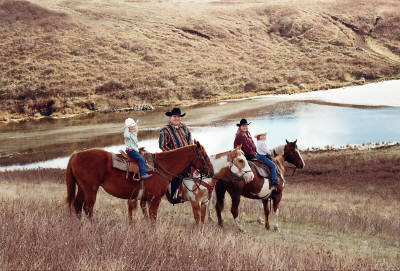 We started raising horses in

select mares  that we take pride in.

I have been involved

with horses for Years and Years.

I used to Break/Train horses

I Was involved with 4-H for over

Our daughters have been members of 4H now for a few years, and are using our horses that we have raised, and they trained themselves. The girls are very big helpers now, from halter breaking time to starting them to ride.  Shawn and I have both been 4h Leaders and love being involved with the program,.

How we came to have our Sire.

Elmo, was brought to me as a 2yr old to be broke. This Gentleman used

to bring 4-6 horses for the summer to be broke. We didnt even know

coming down to pull DNA off of him. Thats how quiet he was, he stayed

off by himself and never raised a fuss (we thought he was a gelding)lol.

Was by far one of the easiest horses i had ever trained. When they

dibbs on him if  they ever decied to sell. well the next fall i ran into him

at a horse sale and he let me know that they had decided to sell him.

So drove up and made a deal on him. Elmo has been with me ever since.

This guy will be with me forever, he is a "Kids Horse" as u can tell from

his page with my kids crawling all over him. Even in the middle of

trouble. We had thought about cutting him when i got him, but as quiet

as he was i thought well i will let him be for awhile. When he was

5/6 we bought our First Broodmare just too see what we would get.

Well in 2002 we recieved our First Foal Rosco. We have never looked

Oops! This site has expired.

If you are the site owner, please renew your premium subscription or contact support.